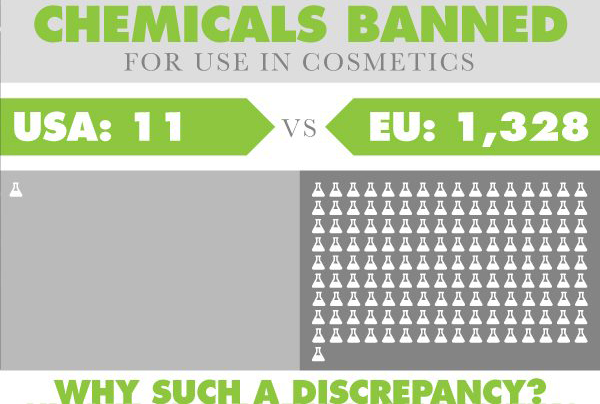 It’s not much of a stretch to say that Europe is very different than the United States. And the differences don’t just lie in the art, food, or culture. One of the biggest differences (as far as I see it) is in attitude towards toxic ingredients in both food and cosmetics.

This topic really fascinates me and leaves me really confused. There are over 1300 substances completely banned from use in cosmetics (by the EU Cosmetics Regulation). A more recent set of regulations called REACH puts further regulations on more than 500 of those toxic ingredients.

By comparison, the FDA has banned 11.

Nope. I didn’t miss a zero there. The United States banned only 11 of the hundreds of toxic ingredients that have been scientifically proven to be harmful to your health.

This means it’s up to you to pay attention to what you buy – and what you don’t.

I have a few ideas on how to make sure the products you buy in the US are safe.  Let’s start by highlighting some of the most worrisome ingredients that are strictly banned in the EU.

11 Toxic Ingredients Banned in the EU, but not in the USA

Formaldehyde: “Formaldehyde,” you may say. “Isn’t that the stuff they used to preserve the frog I dissected in 10th grade bio?” Why yes, yes it is! You’ll find formaldehyde most commonly in hair straightening treatments, as well as some nail polish and eyelash glue. It’s legal to include in US made cosmetics, however it is banned in Europe.  It’s a known carcinogen and can cause breathing issues.

Petroleum: Petroleum is derived from the same stuff that fuels your car. It goes by a few different names, including mineral oil, petrolatum, and paraffin oil. Experts question whether any of these ingredients are safe to use long term because your body doesn’t metabolize it. Whatever gets into your body just kind of… sits there. What does that mean over the long term? Who knows! Which is likely why it’s not used in the EU. Keep your eye out for petroleum in moisturizing products for lips and skin. 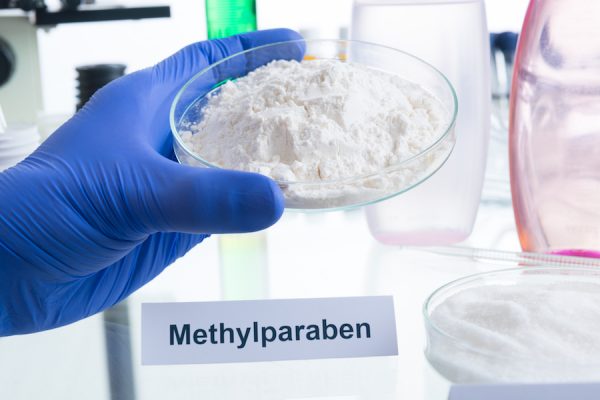 Parabens: Parabens, known by many different names (including methylparaben, isopropylparaben, pentylparaben, isobutylparaben, phenylparaben, and benzylparaben) are a preservative I talk a lot about on this blog. They have a tendency to mimic estrogen in the body, wreaking havoc on your hormonal system. Their impact may even be enough to reduce fertility in men. Parabens are extremely common in conventional skin and hair products, so keep a sharp eye out for them whenever you shop.

Triclosan: Think about the last time you (or your child) took antibiotics. They worked great, right? Well, they may not be as effective next time if triclosan continues to be found in US products. This ingredient may be a part of the rise of antibiotic resistant bacteria – a very, very scary thought. Steer clear of this ingredient in soaps and toothpastes.

Hydroquinone: This ingredient is found in products designed to brighten or lighten the skin. It’s also bad, bad news. Europe and Japan have outlawed it due to its cytotoxic nature. Hydroquinone kills cells and chromosomes if it is used too much, which sets the stage for some forms of cancer. While high doses of hydroquinone are banned in the US, prescription level amounts of 4% are readily available. There’s no evidence that this dosage doesn’t lead to cancer, so it makes the most sense to avoid hydroquinone completely.

P-Phenylenediamine: Otherwise known as PPD, this ingredient is derived from coal tar. It leads to (very severe) allergic reactions and can be found in a huge number of conventional hair dyes. The EU has banned it altogether, and I’d encourage you to ban it from your bathroom as well.

Quaternium-15: Manufacturers use Quaternium-15 to help their makeup last as long as possible. Which is all well and good, until you realize that it can release formaldehyde. Yup, the same stuff that causes cancer and breathing issues. You’re most likely to find this banned ingredient in facial cosmetics, especially powders.

Talc: Talc shows up in cosmetics and hair care products that help get rid of oil (dry shampoo, powdered makeup, deodorants and even baby powder). While it’s great at getting rid of grease, it’s also quite good at containing asbestos and increasing your risk of lung growths and mesothelioma. While there is strict quality control on talc in the United States, it’s much safer to take the route the EU chose and avoid it altogether.

Fragrance: Ah, my old friend “fragrance.” If you’ve spent much time on this blog at all, you know I’m particularly wary whenever I see this word on a label. Loopholes in US labeling regulations let manufacturers include just about any ingredient they want in a product under the umbrella term of “fragrance.” It keeps you from ever really knowing what’s in your products. The EU took the sensible route of closing up this loophole altogether.

And… for some toxic ingredients you will find in sunscreens

Titanium: Titanium nanoparticles are a common ingredient in conventional sunscreen. These particles do block UV rays, but because of their small size they’re also able to penetrate your skin. There is growing concern that these particles may have a toxic effect on the brain, increase your risk of nerve damage, and cause cancer. With risks like that, it makes sense that the EU would ban it!

Avobenzone: Avobenzone is an interesting ingredient. It’s very unstable, and breaks down easily. When it does, it releases free radicals, destructive molecules that hurt your cells, cause early aging, and may even lead to cancer. You’re most likely to find it in sunscreen, so be sure to read your labels carefully before you buy.